The Metal Underground of Tasmania

Greetings Simon! How is life in Down Under?

Greetings! Winter is just now upon us in Australia, which, from a musical viewpoint is good, because it means its too cold to do anything except play guitar.

First of all please tell us some facts about your band „Zero Degrees Freedom“, e.g. when was it founded, where do you come from, does the band name have any deeper significance and what is the ideology behind the band and the music.

I actually started ZDF in the middle of 1999, with another guitarist…but after about a year and a half of lineup problems, (we had about 3 different drummers in less than 2 years) he eventually quit the band. From there, I decided rather than waste more time and energy on trying to secure a band line up, to simply throw out all the old material and write and record an album as a solo project…that was up until about this time last year, when I got the live band together.
We are based in Tasmania, which is a really cool place to live, but the fact that it is somewhat isolated from the rest of Australia means it can be difficult for bands down here to get exposure to a wider audience. Thankfully, the metal scene in Tasmania has grown in the last year or so, and from the looks of things, it will keep getting bigger in 2004.
The name actually comes from a mathematical term which somewhat reflects the machine-like nature of the programmed drums in the earlier recordings, but it also evokes dark, desolate imagery, in keeping with the music.

It wasn’t really a planned move, just lucky timing. I had been approached to form another band with some local guys, including Chris, (ZDF bassist). That band didn’t work out, but the idea of getting a ZDF band together was mentioned, and I was shortly introduced to Will(guitars) and Linton (drums). Ive known Collins(keys) since highschool. It just made sense to take ZDF from being just a studio project to being a live band.

While listening to your music I noticed that the sound is a bit similar to Melodic Death Metal bands from Gothenburg, Sweden. Please give me a short overview what bands influenced you the most in playing music with “Zero Degrees Freedom”.
Beside that are there any other influences, e.g. things like nature maybe? What are the lyrics mainly about?

I’m actually half Swedish and Half German, so maybe genes had something to do with that?
But seriously, my 3 biggest influences, musically, would have to be Devin Townsend, Iron Maiden and In Flames. But that said, I listen to anything from powermetal to goregrind…and elements of a lot of metal styles find their way into my music, but with a focus on melody. The lyrics are mostly dark, introspective looks at various aspects of either myself, or elements of the human condition that I have witnessed in others. 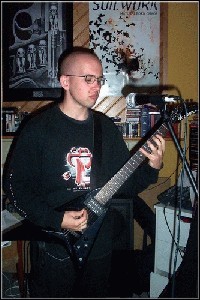 I assume that you are familiar with the Australian metal scene. There exist a few very good acts in Down Under. What about this scene at all – would you say that it is more increasing or decreasing? Do Australian metal bands get enough support nowadays (at least in their own country)?

Unfortunately, because of Tasmania’s isolation from the rest of Australia, I don’t get the opportunity to see as many mainland Australian bands as I would like to, but thankfully, there are quite a few excellent metal bands in Tassie, like Intense Hammer Rage, Psycroptic and Nosce Teipsum (to name but a few). Earlier this year, we played some shows in Sydney and Canberra, and that definitely opened my eyes to the wider Aussie metal scene. I’d say overall, the metal scene in Australia has been getting bigger, but it still has some room to grow.

The “Safety in Numbness” album was released in 2002 and the “A Return to Darkness” album in 2003. How were the reactions to the two released albums so far?
What about your next output? Can we expect any stylistic changes or innovations on the new album? And when will it finally be out?

Since the other guys have been injecting their own ideas into the band, the music has gone through a few changes. Linton and Will have added a slight black metal element into the music, Chris’ goregrind influence is slowly creeping in, and the addition of Collins on keys has added a huge amount of depth to the sound overall. That said, with all these influences thrown in, the music is still definitely melodic death metal. We are looking at recording a full length album later this year, and will be recording a split CD with another local band, “Nosce Teipsum” to be released around June/July…which will be the first release with the whole band on it.

What about a label deal? Did you already get any offerings in the past or are you still searching for one. What label would you personally like signing your band?

Its not really something Ive looked into yet, so far Ive just been happy to self-release my music, but it is something we will probably be looking at as a band for the full-length we are planning to record towards the end of the year. I’ll let you know if anything happens on that front though.

Finally I thank you for answering my questions Simon. I wish you good luck for the future of your band. If you have any further comments or wishes you could place them here.